Approaching the route. The main gulley is swept by huge ice collapses multiple times each day.

Joe Terravecchia first lay eyes on Pissing Mare Falls in remote Western Brook Pond, Newfoundland, twenty years ago. “Casey Shaw and I first tried to go there in ‘96, but they were having a shitty winter, so we went to Quebec instead,” he says. “The next year, we looked at a tourist brochure and saw a photo of the waterfall in the park, and hired a snowmobile guide to take us to the top of the falls. We didn’t know it at the time, but the pond was frozen that year.”

Terravecchia is a mild-mannered 56 year-old carpenter from Lebanon, Maine. He and his wife Karin have two teenagers and live pretty much ordinary busy lives. Although he only gets to go climbing maybe one day a week – plus an evening or two at Salt Pump – Joe’s  known as one of the best all around technical climbers in New England. For vacation, he likes to roadtrip up to the rugged island province of Newfoundland – a more wild, subarctic version of Maine, really.


Casey and Joe made the first ascent of Pissing Mare Falls in 1997. As they completed the climb, Terravecchia’s eyes were drawn to even more radical terrain around the waterfall, where the winds and updrafts catch droplets of water from the nearby falls and blow them against the surface of an overhanging rock cliff, forming a substance known to climbers as spray ice. “We saw it in 1997, but it just seemed otherworldly. The next year we changed our minds and rapped over the route to check it out.”


Part of the allure of the challenge was the inaccessibility of the climb. Pissing Mare Falls is located high above Western Brook Pond, a freshwater body of water 12 miles long and 600 feet deep, with fiord like walls rising to a plateau above it. “The locals are super afraid of snowmobiling on Western Brook… It doesn’t often freeze,” Terravecchia explains. “And when it does it’s not safe and it’s super spooky. You could go in and die… no problem. The first half a dozen times down it we wore full survival suits.”

A few years later, knowing it was a warm season and the pond wasn’t frozen, they tried a different tactic: “We carted my Dad’s 12 foot aluminum fishing boat up there with a 69 Johnson engine. We snowmobiled it in two miles to the lake.”

Last month, Joe returned with Casey to give the line another attempt after two decades of trying. He finally ended up doing the climb – but it wasn’t the way he had always imagined it. 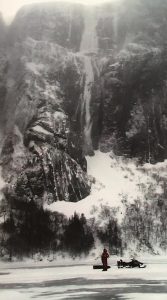 The biggest route in Gros Morne, a 2000′ WI 5+route called “Captain’s Courageous”, that Casey Shaw and Joe Terravecchia made the FA of it in 1999.

How’d you get to the climb this year?

We’ve figured out a way to avoid the pond completely. We snowmobiled up the backside, approaching from the top. It used to be 6 hours. Now, with the right local knowledge, we got it down to 1:20. It was all the knowledge Casey and I had gained. It’s like snowmobiling on the Alpine Garden of Washington for 20 miles…

So we camp out on this plateau above the falls. I’ve probably spent 50 nights up there over the last ten years. We’ve done probably a dozen first ascents in there… The biggest one we called Captains Courageous, it’s 2,000 feet of ice climbing. I think it’s the biggest ice climb in eastern North America.

What condition was the route in?

The route was formed up better than I’d ever seen it.

We spent eight days camped out on top of the falls, in totally crap weather… We were getting at the end of Casey’s stay and running low on food, so we called for a pick up. Casey had to get his flight home in two days.

I’d never seen the route in this kind of shape, and I didn’t have to go start work. I could take another week, and Karin understood.

I was bummed going out because I had another week left, and I knew it was in condition. I tried my best to get Casey to extend his ticket. I really wanted to do it with him, because we’d been trying it for so long. He texted me from the airport at Deer Lake on his way home. I could tell he was bummed, but he was totally supportive. He wanted me to get the climb in.

Rumor was Will Gadd was due to arrive in five days… and there was five suns on the forecast for the next week! I’ve never seen that in twenty years in Newfoundland! 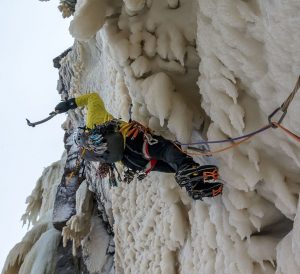 Joe leading the crux bulge of perfect spray ice on the 6th pitch.

So who’d you end up climbing with?

I stopped into the motel we were staying in, and Will & Anna [Will Mayo & Anna Pfaff; two American climbers] were staying at the same place. We started talking, had a beer and I said, ‘what the heck’, and I invited them to do it with me the next day. We went in at 5 a.m., and we were starting the approach at 6:30.

It turned from a total depression drive home to, like, giddy happiness.

Is spray ice different to climb than regular ice?

Well, the screws aren’t nearly as good, but It’s awesome to climb. It’s so much fun. We got lots of 14 &17 cm screws in, only the last 250′ was 10 cm. zHonestly, we’ve been there years when the spray ice is really foamy and you wouldn’t trust it. I think it just depends on the temperature when the ice is laid down. If it’s partially frozen when it lays down, I think it forms airy ice. If it lays down in warmer temperatures, I think it’s more solid ice. I haven’t figured it out yet. But you could trust the screws a little more this year.

What was the hardest part of the climb?

I led this overhanging bulge that was WI 6. Will’s lead, the first part was spray ice and then it changed to drip ice, was also hard, but Will’s so strong. That angle is pretty casual for him. It’s mostly moderate climbing… but it’s just one of those lines that’s a beautiful, circuitous, natural passage when you look at it and – honestly, I’ve had sleepless nights thinking about it,  because I have been involved in several accidents up there. It’s an ominous wall, and it’s scary looking.

I really enjoyed climbing with Will and Anna. I always like climbing with guys who are better than me. Anna is also so much fun to be around – very strong and motivated! But part of me definitely feels bad to have done the climb without Casey. That was definitely the hardest thing about it. 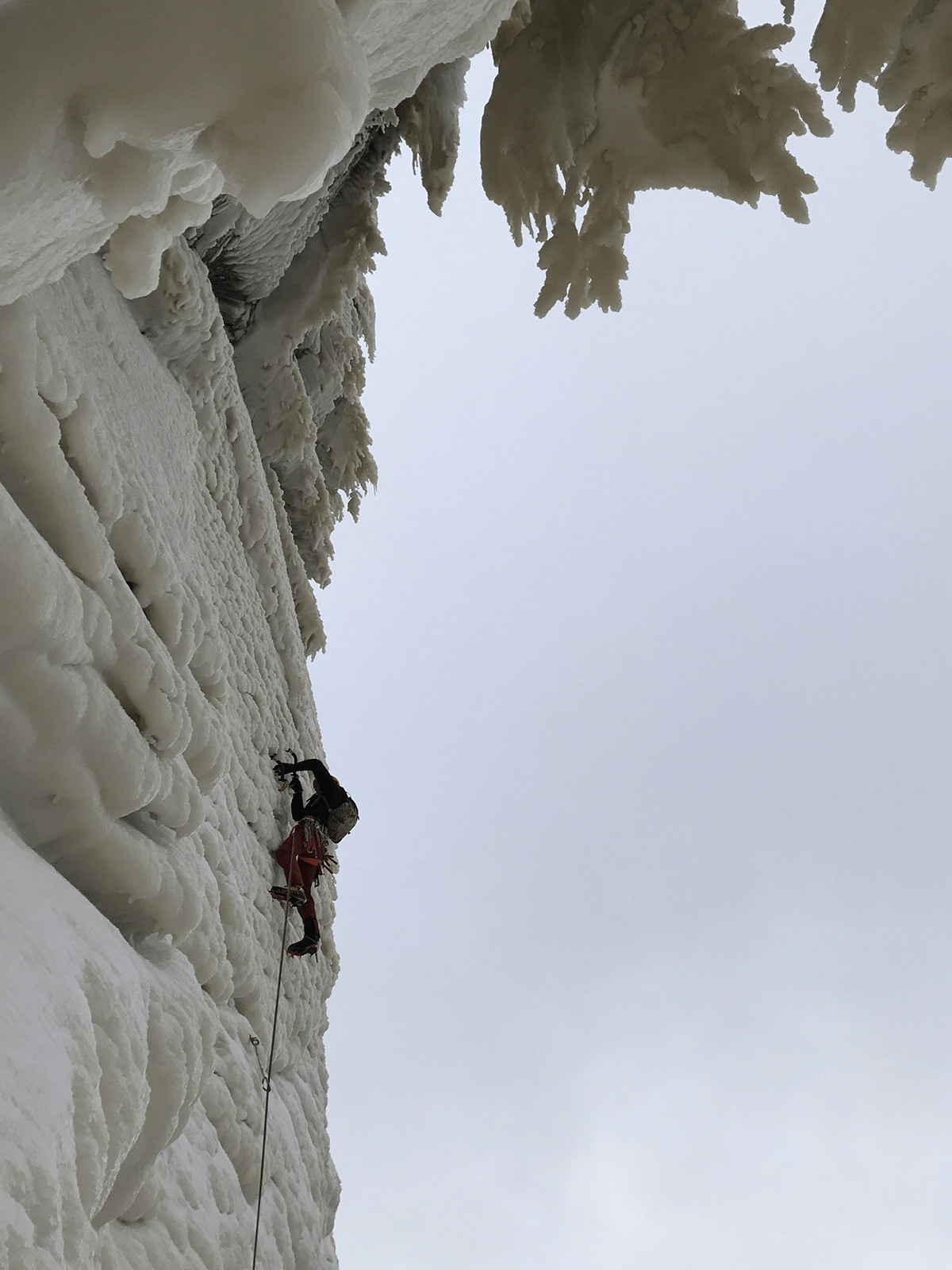 Will Mayo leading the spectacular final pitch of spray ice.

Anna, Will, and Joe celebrating with scotch and smoked salmon on top of the falls with the Newfoundlanders that snowmobiled in to pick them up.