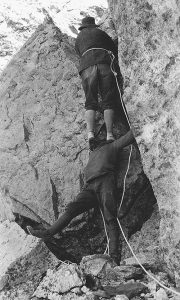 Imagine it’s the late 1800’s and you are an avid hiker. Donning knickers or skirts and heavy leather boots, you are exploring a new mountain and you find a rocky outcrop that is impossible or impractical to go around. What do you do? The summit hungry individual you are, you’d probably either take the risk of falling and go for it right there and then, or you’d turn around and, after tossing and turning all night, find some similar rock outcrops down low to practice on before trying again. That, in a nut shell, is how rock climbing came to be.

Those mountain climber types encountered more such cliffs the more climbing they did, and eventually decided to find ways to protect themselves so they would be less likely to fall to their death if they messed up. The leader would tie a rope around their waist and cast off up chimneys (very wide cracks) and lower angle faces, with their partner sliding the rope around their body as a belay. They might put some rocks in their pockets to chock into a crack and attach the rope to as protection between stopping places (belay ledges), or seek out flakes and knobs of rock to tie off in a similar fashion.

Those who were most committed eventually began seeking ways to mimic the rocks-in-pockets protection by fashioning wooden or iron pitons that could be hammered into cracks. Rock and mountain climbing gained popularity after World War II, and a few visionaries recognized that the hammered-in pitons were permanently damaging the rock, so they sought a way to climb more ‘cleanly’. The lightweight spring loaded camming devices we have today – along with harnesses, dynamic ropes and sticky rubber climbing shoes (not to mention good climbing technique!) – now allow us to climb difficult and delicate routes up a full variety of crack widths without leaving even a scratch in our wake. We now call this type of climbing, where the protective hardware is all removable, traditional or ‘trad’ climbing.

If you’ve imagined scaling Cannon Cliff or Cathedral Ledge in the White Mountains, or if you’ve gazed up from your car window at the granite faces of Yosemite Valley and hiked around the lakes beneath the Tetons, you are looking at cliffs and mountains that require traditional climbing skills. 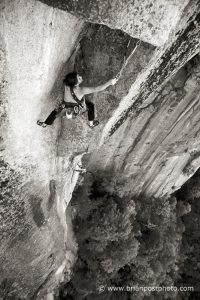 Janet on the Prow, Cathedral Ledge. Photo by Brian Post

Trad climbing actually gave birth to the three main types of climbing we do at Salt Pump: bouldering, sport/lead climbing and top roping. Each type has its benefits. With sport/gym lead climbing and top roping, the path up the rock is already made for you because the anchors are pre-placed. It is fairly predictable, which makes it less risky, and since the climber is not fiddling with placing removable gear and can mostly just focus on the climbing movement, she can complete more physically demanding climbs. Trad climbing, on the other hand, opens the world up to a motivated climber because she can theoretically climb any cliff, anywhere, and it’s seen as ‘cleaner’ because the climbers leave little or no trace of their ascent. Trad climbing is actually more like bouldering, which because of its lack of hardware, can also be practiced anywhere there are boulders.

‘Trad’ climbing is not just a sport but a craft; it requires not just athleticism but also an understanding of physics, engineering, navigation and geology in addition to ‘soft’ skills like risk assessment, collaboration, leadership and planning. The best way to learn to trad climb, like any other craft, is to put the time in under the careful tutelage of a master. You will learn the most and stay the safest by either finding a competent friend who takes you under their wing (this works well as trad leaders are often looking for motivated partners), or investing the time with a professional climbing instructor or guide. At Salt Pump, keep your body strong and limber on those lead climbs, top rope climbs and bouldering circuits, and consider joining our trad climbing skills series.

Janet will be teaching a three part Trad Climbing Skills Series at Salt Pump which will include indoor training on the evenings of March 30 and April 6 and a full outdoor day on April 8. If you’re interested, you’re invited to join her!