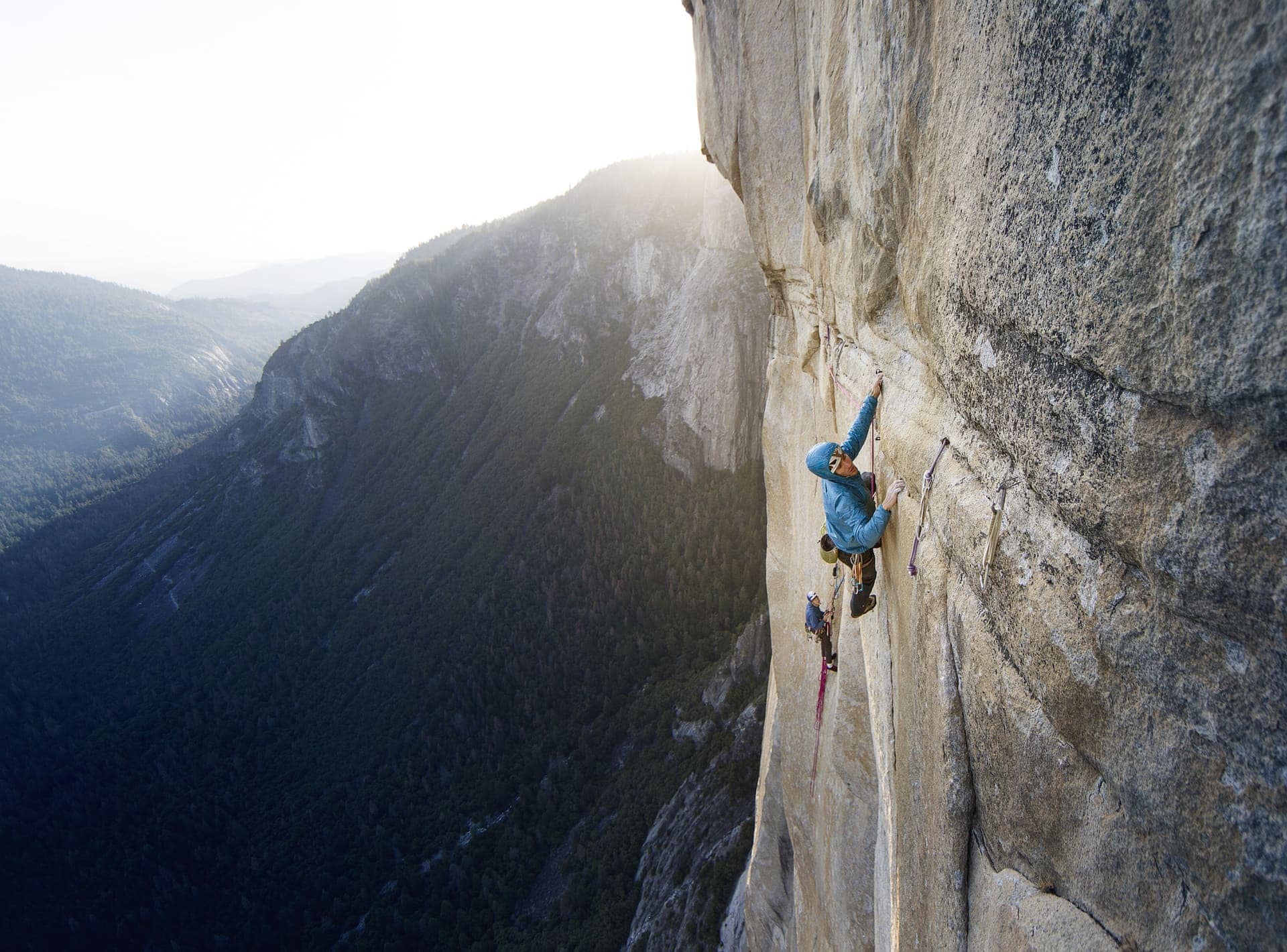 “Failures are always interesting,” Ethan Pringle muses. “That’s where you probably try your hardest, because you didn’t actually do it, so you didn’t have to give it just 80 percent, you had to give it 100 percent… and still not do it.”

Ethan was eight years old when his father took him to Mission Cliffs, a San Francisco climbing gym four blocks from his house. “I immediately fell in love with climbing,” he says simply. It was Ethan’s willingness to fail - often on some of the hardest rock climbs on planet Earth - that quickly drove him to the top of the sport.

In 2007, Chris Sharma invited Ethan to try a climb he was projecting at Clark Mountain, Nevada. The hunk of rock looked futuristic. “It’s the most inspiring climb I’ve seen,” Ethan would later tell Rock and Ice Magazine. “… [An] obvious line, steep, long and engaging, intimidating, and features fun climbing throughout, all at a crag that has very few visitors.”

Chris went on to make the first ascent of the climb the next year, and the line went into the history books as Jumbo Love – at 5.15b, the hardest rock climb in North America. Quietly, Ethan kept returning on his own to the project. Then for a couple of years, he stopped trying it all together.

“I felt like giving up more than a few times,” Ethan told Rock and Ice. “…Every time I made reverse progress I got frustrated and felt the yearning to give in to defeat. It was hard for me to keep in mind that making reverse progress, and taking one step back for every two you take forward, is pretty much guaranteed to happen when projecting something that is that hard and intimidating.”

A California boy on the big stone. photo: Freddie Wilkinson

After 90 individual attempts spread out over eight years, Ethan succeeded in making the second ascent of Jumbo Love. “I think maybe I have a competitive nature,” he reflects now. "Part of the appeal of a hard project is knowing that if I do it, I’m up there with some of the best in the world. That gets me kind of psyched. The challenge of trying something that’s difficult even for the best." That same drive has pushed Pringle to benchmark achievements in multiple disciplines like Realization (5.15a sport), Meadowlark Lemon (V14 boulder), and Cobra Crack (5.14 trad).

A year after he put Jumbo Love to rest, Ethan became infatuated with Golden Gate, a 35 pitch 5.13b mega route up the Southwest Face of El Capitan. The route had never been free climbed in a single day – an audacious goal for anyone, especially someone with his limited El Cap free climbing experience. After spending one single day practicing the route to familiarize himself with the crux pitches, Ethan Pringle started up Golden Gate at 11:30 p.m. with his good friend RD as support.

“I’ve definitely tried really hard on other rock climbs and not done them, but this was an entire day on one rock climb, instead of just one minute on a boulder problem or 15 minutes on a sport route," he says. "It felt like a way bigger commitment, or effort.”

After eight hours of climbing 20 pitches of "moderate" terrain up to 5.11 by headlamp, Ethan reached the first definitive crux in the morning hours: the infamous down-climb pitch….

So what’d you learn from Golden Gate?

I learned, I can dig deep. I sent the down-climb pitch first go, and thought, "cool, I might have it in the bag". Then I climbed up to the Move Pitch, with still quite a bit of energy left but I was definitely kind of… getting tired. And I fell on the crux. And instead of just lowering down to the pseudo-no hands rest before the crux, I lowered all the way back down to the belay, because that’s my ethic. So I had to climb the entire pitch again, and fell again. At that point I had climbed this heinous crimpy 12a R in the sun and worked on this V8 boulder problem for a number of times.

I was like, I’m pretty smoked now, I don’t feel like I really have it. I kinda gave up. And then I was like, well, I might as well try it one more time, since we’re here and RD is okay with that. I lowered all the way back down to the belay again, and my fingers and toes were in quite a bit of pain at that point. I was like “f#$k it”, I have nothing to loose… Which probably allowed me to actually climb it, and somehow, I pulled it out on the 3rd try, even though I was way more tired than the first two times... I wasn’t really doing anything that differently, I just had that extra focus. I didn’t feel as pressured to send it because I had given up already. 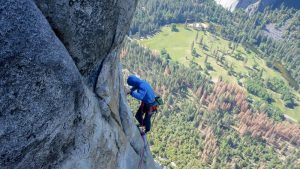 Ethan sizing up 'the down climb', a short but baffling sequence down-climbing a hard granite slab. photo: Freddie Wilkinson

How’d it go after you sent that pitch?

After I sent the Move Pitch, I was in extreme pain. My fingers were throbbing, my toes were on fire, I had just given everything… not everything – every little last bit of reserve energy – but that’s what it felt like...

I got to the ledge below the Golden Desert pitch, I think I actually fell asleep for a minute. But I was still sending, so I was like, “well, I have to keep going”. I somehow eeked my way through the pitch, RD jugged up. I did the A5 traverse somehow, RD jugged up. There’s a little 5.12a traverse after the A5, and I fell because I didn’t know the beta at all. My fingers and toes were more brutalized than they’ve ever been at that point in my life. I was just in so much pain.

It started to get dark on us; the 24 hour mark was getting close.

I kept going, the next pitch was a scary 5.11 slab / crack thing. But I built the belay too low, and the next pitch was a super slabby 12a corner pitch that I’d never tried. It was dark, and I was climbing by headlamp, and I got up to the crux and it was this heinous sloper dishes… I tried, but I was just scared… I just didn’t have it.

I couldn’t force myself to keep trying. So, I pulled on some gear, and then build an anchor in the crack, but there was nothing for me to stand on. I couldn’t move. I was completely zorched.

How'd you get off the wall?

RD radioed up to Spencer, who had been filming us earlier that day and was waiting on top, and asked him to rap down and throw us a line to jug out. But he didn’t pay out enough rope and ended up 50 feet short of us, so he had to jug back up to the top, pay out more line, than rap back down and toss up a rope. By that time I had been hanging in my harness, completely stranded for like an hour and a half. By the time I got to the top of the wall, I don’t think I’d ever been as tired as I was. It was 3:30 in the morning – we’d been on the go for 27 hours.

What do you think was the ultimate reason you failed?

I think the reason I didn’t do it was… an error of strategy. We had bypassed the last 500 feet of climbing on the recon, so I didn’t get a chance to try this super slabby 12a corner pitch at the top.

I learned a lot from that experience – I basically learned that any pitch on El Cap that’s harder than 12a - Expect it to be hard enough that you might need to fall once or twice and figure out beta in order to send it. Also, that pitch seemed… uh, more sandbagged than other 12- pitches I’ve tried in the valley. 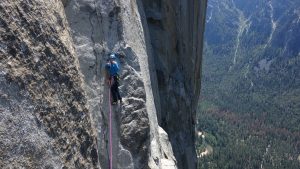 Before the Move Pitch: All smiles on the Golden Gate recon. photo: Freddie Wilkinson

What’s your relationship like in general with big wall free climbing these days?

It’s funny because I get really psyched on the idea of big wall free climbing… Every time I do it I have a blast. Some of the most memorable days I’ve had in climbing have been on El Cap. But I don’t get around to doing it as much as I want to because I get psyched on shorter, performance-oriented goals… maybe because to do a big wall free climb is going to be that much more work.

But it’s just so much fun. Every time I finish a big wall, I’m like, okay, I want some time on the ground, I want to not do that to my mind and body for at least a few days, but as soon as the immediate surface level discomfort starts to dissipate, I’m like, oh my god, that’s the best thing ever!

You’re born and raised in the San Francisco Bay area… What role have family and home played for you?

The experience of helping my Dad and being close to him after he had a stroke four years ago just completely recalibrated my perspective. It definitely gives me a huge appreciation for being able-bodied and being able to do what I do. I always felt really lucky as a climber that I found this thing that I’m super curious about and passionate about and it takes me all over the world… So many people don’t have something like that.

Most climbers, everyone gets burnt out every now and again, but we just know that we’re really lucky and we’ve found something super special… But seeing my Dad in the state that he’s in, wheel chair bound and half paralyzed, it gives me a new appreciation for being able-bodied and healthy. Being so close to something that sad, has opened me up in a lot of ways.  I feel really grateful for it in a lot of ways. It sucks that my dad is in the position he’s in, but it’s taught me so much about sadness and love and appreciation. His mortality forces me to think about my own mortality. I react positively to thinking about those things. It actually makes me appreciate life more, to know it can be taken away at any point, and will be taken away at some point.

Ethan is sponsored by Mountain Hardwear, Madrock, and Touchstone Climbing. 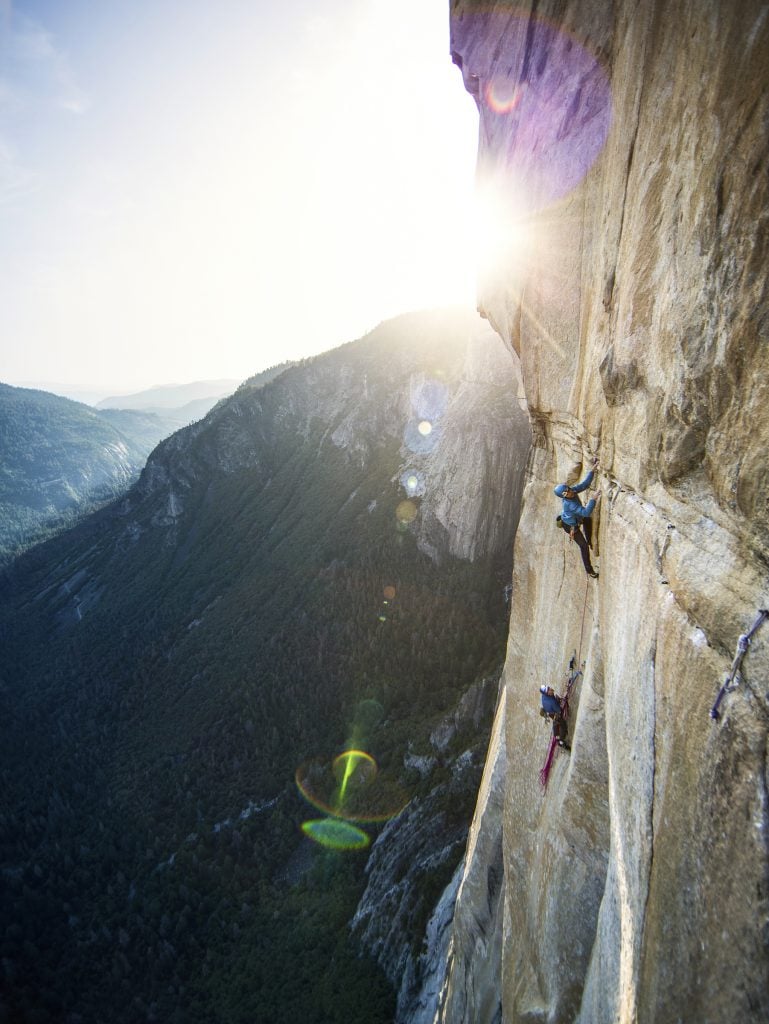