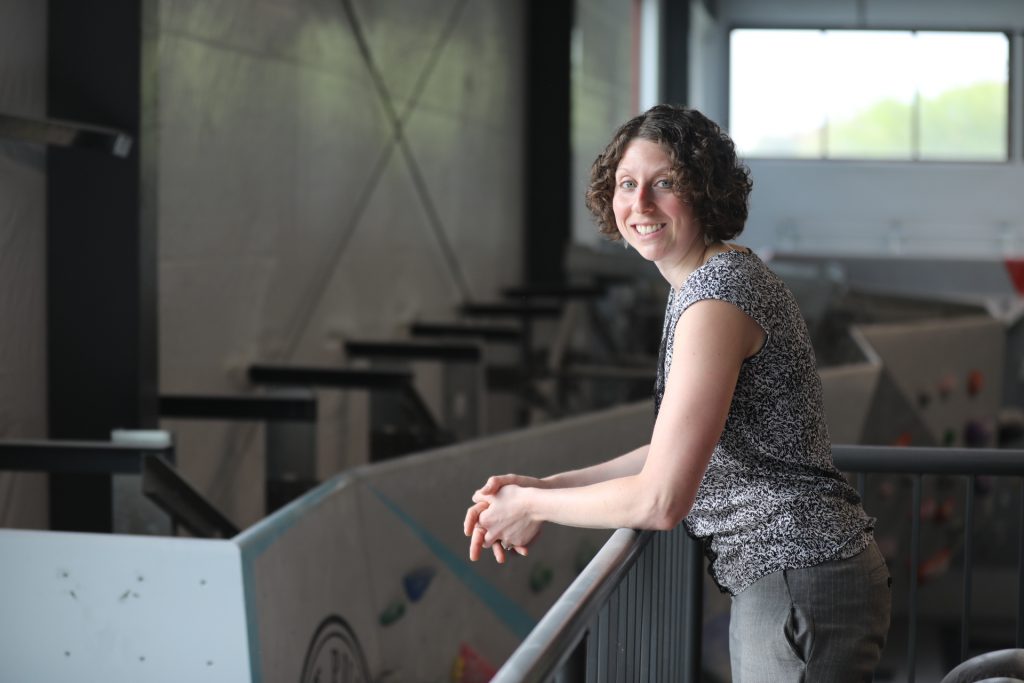 Life changed for Hilary Sherman on a frosty day at Rumney in November, 2014.

“Sally’s Alley is a route I’ve done – I can’t even tell you how many times. I’d been warming up on it for years. But that day, it was cold. There was ice that had formed, and it had melted and dripped a little bit onto the rock.” After her husband Jed climbed it, Hilary pulled the rope and started to lead climb up to the first bolt. “My hands were cold, so I never felt the wetness…”, she says. A move below the first bolt, she unexpectedly slipped off a hold.

Born and raised in Massachusetts, Hilary had discovered climbing in high school, but she really got psyched on the sport when she enrolled at the University of New Hampshire and fell in with a rag-tag crew of undergrads who spent all the free time scrambling around the boulders of Pawtuckaway. She claims to not be much of a natural athlete. “I’m the most uncoordinated person you would ever meet…” she says modestly.  “Climbing was the first time I was ever good at anything. I was never even into fitness, per se. I came from a very un-outdoorsy family. Going out to eat, and going to the movies, that was our thing.”

Despite such humble roots, Hilary quickly excelled. Eventually, on the schist crags of Rumney, New Hampshire, she discovered her true potential, redpointing a slew of 5.13s including Butt Bongo Surfer, Dark Star, Suburban Surfer and Muscle Beach. “I’ve been trying to stay away from the style of climbing I like, that I’m good at… Dark Star is 13c, but it’s a face climb. For me, that was easier than some 13as. I’ve been trying to get on the bouldering, squeezy things that are less delicate. It’s gratifying for me to get some of those kinds of climbs that women don’t typically seek out.”

Recently, an epic home building project on her house in Madbury, New Hampshire has kept Hilary, and her husband, Jed, away from climbing. But they’ll be back at the crags soon, with Lincoln their dog-child in tow. You can read some of Hilary’s writing on Crush Crux.

Here, she talks about the biggest challenge of her climbing career.

What was your first thought when you fell?

It’s weird… I was just like, okay. I knew I didn’t hit my head. I could feel my toes; I wasn’t paralyzed. I was like, well, I’m kinda embarrassed but I didn’t think I was that hurt. Immediately I felt crazy intense pain and I couldn’t speak, but then, within a minute, it was gone, and I felt nothing, very little pain. And I was like, oh, maybe I’m okay.

And the whole time, people keep showing up, and I’m getting super embarrassed, like “oh, what a newbie”, feeling like an idiot, and also thinking I’m totally okay and we’re making a big deal out of nothing… At the hospital, I was like, please don’t cut my pants, I can take them off, I’m fine. They’re like, no.

They wanted to take an xray of my back, and I guess they could tell the bone had come out on my ankle, but I didn’t know — nobody had told me. I just thought, oh my ankle hurts — like I sprained it. And while I was lying there I was like, “ah, why don’t we take a look at my other ankle, cause that kind of hurts too.”

What was the final tally? 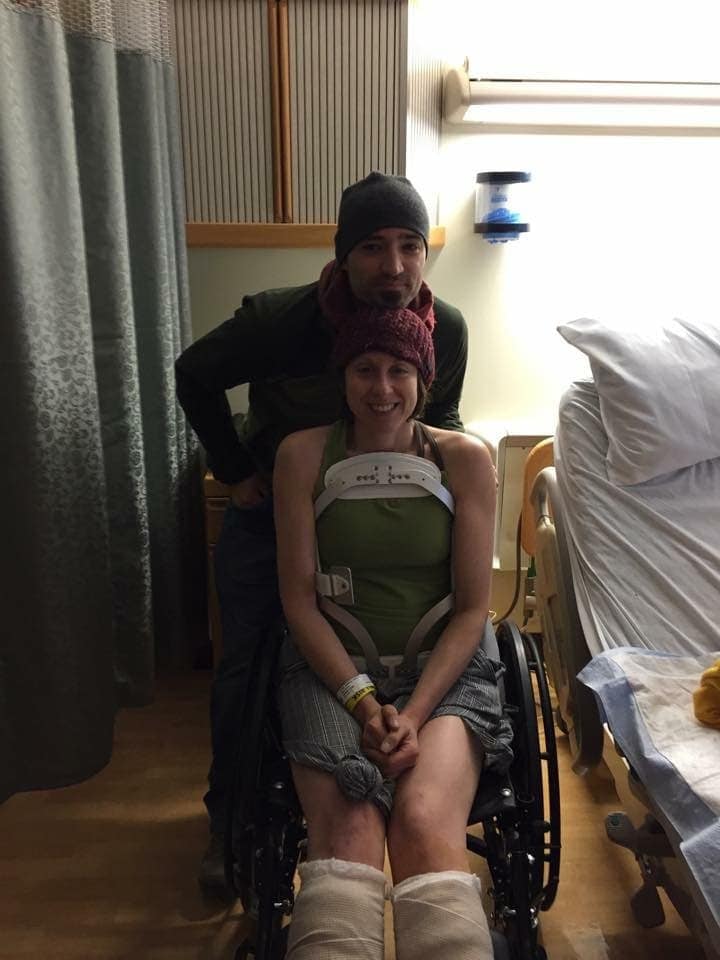 I fractured my L2 vertebrae, I snapped the tib and the fib completely off my left ankle, and broke both heels. Really the most substantial injury was my left ankle, which they pretty much had to rebuild, they took bone from my shin, and some fake bone, to rebuild the joints. They couldn’t find all the bones, they said. It was just pulverized.

By the time the rescue and surgery happened the day of the accident, I was asleep. It wasn’t until the next morning that I talked to anybody. The surgeon had a very bad prognosis. He was like, “you’re going to need a cane, and climbing is not happening…” Very negative.

That was the first time it hit me. Not that I actually believe him, that I wouldn’t climb again, because – people climb with no legs!

How was it, being immobile?


The first couple of weeks were okay because I had no choice, and I was in pain, so I pretty much watched TV and slept. When the pain started subsiding, then the stir craziness started to set in.

Being in pain from not moving — I’d never had that experience of being so bedridden that it just hurt to lay down. I’d have to roll over and change positions every 20 minutes because it would just hurt to be there.

How long were you in a wheelchair for?

Almost three months. Our only bathroom was upstairs, so I was literally confined to our bedroom and the master bath, and I had to rig up stuff for me to scoot because our toilet’s in a cubby, so I’d wheel my chair over and then I’d have a Home Depot bucket that I’d scoot on, and Jed put all these bars in… actually, that part was actually physical.

Another interesting part of all this was they didn’t want to send me home at first, because they didn’t know if I’d be able to take care of myself, and I had to prove to them that I could get into and out of the wheel chair by myself, and thankfully, due to climbing and fitness, I was able to do that. Otherwise, they wanted to send me to a nursing home, and I feel like that would have been really hard on me. It was much better to be home with Jed in my own place, with my dog.

Did you set any goals to come back from the injury?

Ah, not really, I just did everything I could do. As soon as the pain in my back subsided — my leg pain was pretty dealable but the back pain was the worst — but when that started to subside, I started to do knee pushups on the bed, with my cast feet off the bed. I was just always trying. I had my little 5 pound dumbells, and resistance bands.

Later on, Jed built me a wheelchair accessible hangboard.

When was your first day climbing outside? 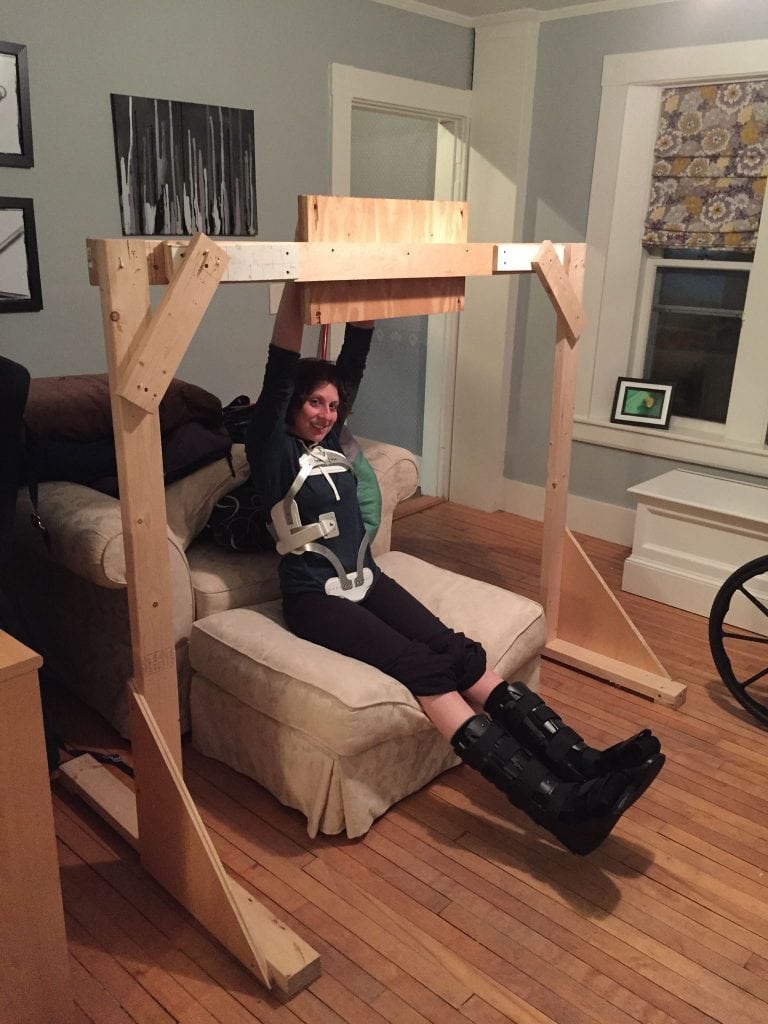 The timing actually worked out perfect.

It was not quite warm enough to go outside yet, so I had a few top rope days in the gym, then a few top rope days outside before the doctor gave me the okay. Really, I couldn’t have had the accident at a better time of the year. I took the winter off and then started climbing in the spring.

It was very mentally challenging to come back. I was scared. I had trouble even going down stairs after the accident, I felt really fragile, I had this really intense irrational fear of just… breaking. Coming back to climbing and getting myself to be leading again and trying hard again, that has been probably my biggest challenge.

Would you say you’re back?

I’d say physically I’m probably back to where I was. Maybe mentally close. I’ve repeated one 5.13 since the accident. I haven’t sent anything new yet… so I’m still a little mentally challenged with that. I got really close to Predator last year. I don’t know if it’s become too much of a mental issue because that’s what I was projecting before the accident — I’ve one-hung it probably twenty times. So I don’t know if that move’s just hard for me or if I’m making it, like, I have to do this route to prove I’m back, and it’s adding too much pressure…

On the training aspect of things, what gives you that discipline to work to improve?

I think always having a project goal keeps me motivated. When I’m feeling tired of my workout, or I don’t want to do it, I just think about what I’m trying to accomplish, whether it be a specific climb, a grade, or a place I want to be, I just think about that and that motivates me.

I think for women in general, more physical workouts have a lot of value. A couple of years ago I started doing cross-fit / mountain athlete workouts with Todd Schaefer. We used to do them in his driveway. It involved things like lugging around cinder blocks, or flipping tires, or just dragging heavy things around. For me, those made a huge difference because I never had a lot of pure power… When I started doing those with him that’s when I started ticking off 13s… You know, going from, one 13 to — I got three 13s in a year! Because of that raw power. I like that kind of workout, and for women it can be huge… Cinder blocks are great because you have to pinch them, and they’re heavy. So it’s two exercises.

Where’s climbing going to fit into your life going forward?

I want to climb forever, and I always want to keep improving. 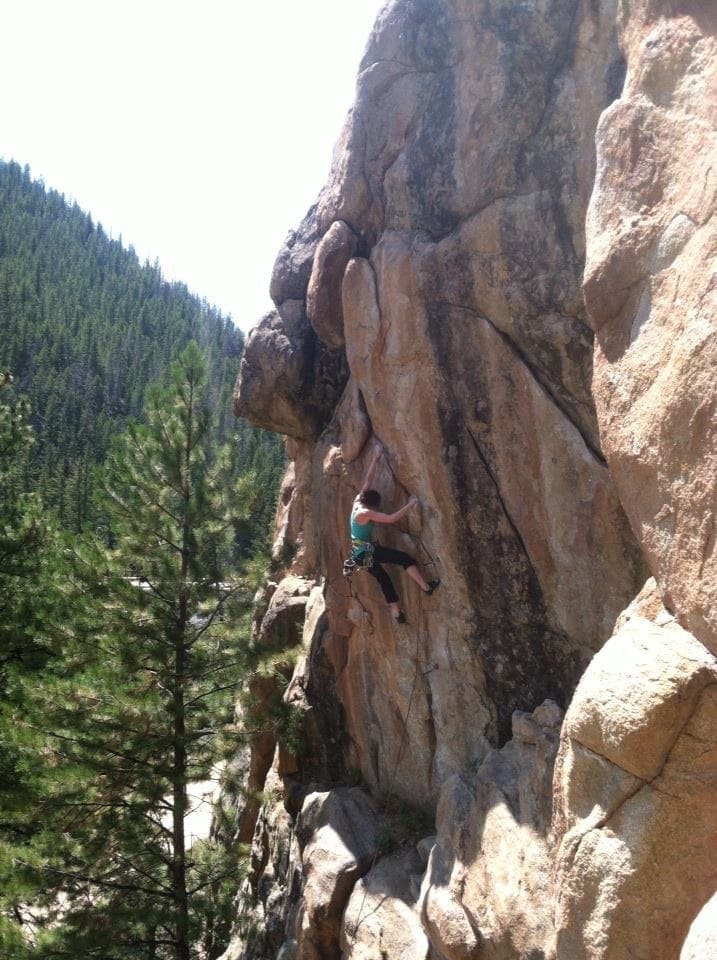