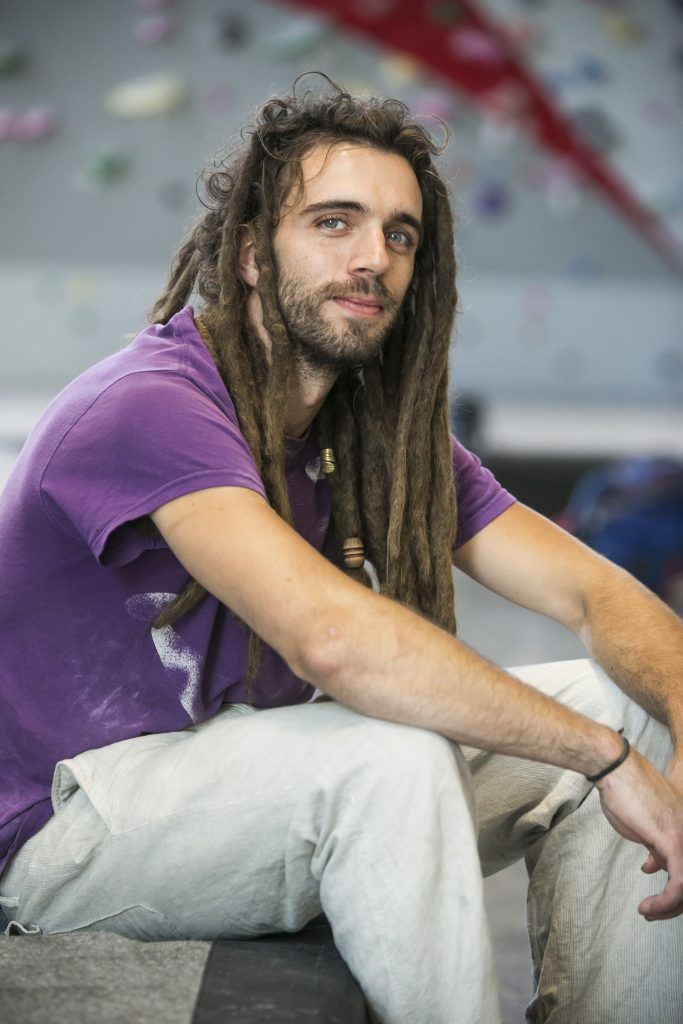 Henry Fitts was scared the first time he tried climbing. The thirteen year-old kid from Pine Point walked into the Maine Rock Gym one day with his Boy Scout troop, but he got so terrified that he failed to reach the top of any of the climbs he tried.

“I used to be really scared of heights,” Fitts says today. “And I think that’s why I went back. I went back and bought a membership the next week, and I’ve been pretty much climbing ever since.”

Since that fateful day fifteen years ago, Henry has grown into a man of many talents. He learned to ride a unicycle and surf the waves off Prouts Neck. He became a professional baker and chef. His climbing abilities flourished as well, from his first outdoor adventures to  realizing both 5.13 redpoints and double-digit boulder problems.

“You wouldn’t necessarily know it from looking at him, but he’s got insane core strength,” says Tino Fiumara, Salt Pump’s head route-setter. “He’s a campusing master, always looking for ways to campus things. And he’s got really strong fingers.”

Salt Pump denizens know Henry for his quiet presence, impressive feats of strength on the back bouldering wall, and his inspired route-setting. Currently working multiple jobs to save for a winter’s sojourn to Thailand and Vietnam, we caught up with Henry to learn more about his climbing journey.

Who were some of your first partners?

My first partners were my siblings. My older brother John was the one I learned how to do everything with — we “trial-and-error learned” — how to lead, then how to do trad… how to do everything together. It could have been safer climbing with someone who knew what they were doing, but he’s a good belay partner, we’re still climbing to this day.

I have four brothers, and all of us have climbed at one point or another. Four out of the five of us are still climbing… we got my parents in on it, too.

Our first outdoor experience we went to Jockey’s Cap and set up a top-rope, than we went and did our first leading weekend at Rumney, but we only had six quick draws.

How’d you get through Rumney with only six draws?

We epic-ed occasionally, once or twice by accident. Probably Cannon was most notable. I wasn’t very good at route finding, I thought we were going up a 5.7 but it ended up being a 5.9+ R. I got real scared and got three pitches in and then ended up bailing. That woke me up — that was the time that I realized, ‘this is serious, I’m not in the gym anymore’.

At what point did you start to get serious about pursuing hard rock climbing?

What are some of your most proud sends?

My project list is more impressive than my send list. Predator was my first 5.13, but it was also my first big exposed hard rock climb. I really enjoyed it. It was definitely a mental challenge…. I had never taken a whipper hundreds of feet off the ground, I had never commited to skipping bolts… It didn’t go easily, it took me a few trips over to Rumney to get it.

What are some of the things you’re working on?

Right now I’m working on saving money for a trip to Vietnam. So I’m working a lot. I’d like to try some hard routes at Rumney, and this boulder problem up by Tumbledown Dick. It should be a good project for the fall.

Probably Lonesome Dove, a 10a at Rumney. It was one my first leads, and I go back with everyone I take to Rumney to this climb.

What drew you to route-setting?

I can’t remember exactly how I got into it.  I started at the Maine Rock Gym when I was still pretty new into climbing, but my climbing style was a little different from other setters, they were very technical, and I was not. At that point I was just swinging around, doing monkey business. They let me do a few for fun and then gave me a membership for continuing to set. That drove me to do it more and more.

Do you still feel like your style differs from other setters around you?

I think so, yeah. Everything has their own style here, which is a very good thing.

What are some of your challenges in route-setting?

I’m not very flexible, and I’m not a very good slab climber… Those things that I don’t do enough — I don’t climb enough slabs, I don’t stretch enough — that corresponds to hardships in setting. I can always work on them.

What do you enjoy most about route-setting?

I enjoy the creative movement of it. There’s no clear cut, cookie cutter step A – step B for making a route. You can start in the middle, you can start at the top, you can set a boulder problem and make a route of it… you can just create new movement, which I really like. It’s a fun creative outlet that’s also physical.

I definitely take it artistically — that’s come about more the longer I’ve set. It used to be just about trying to get holds on the wall, now it’s trying to create something that’s aesthetically pleasing, has good movement, and is varied.

Does outdoor climbing influence your setting?

Absolutely. I went to Shagg this spring, and came back and I was setting on the lead wall and all the routes I set that day were kind of Shagg like — you know: big, flakey, powerful, not hard. I think whenever I see something outside I try to mimic it — not directly, but to utilize some body position, hold type, angles — that stuff cues you in how to start a route.

Do you train for climbing?

I do. I try to keep it really fun, because that’s one of the things I like about climbing, is that it’s a fun way to get fit. But I do train —  I do hangboards, some running and cross-fit.

I do a lot of work on the hangboard, a lot of ring work, a lot of core work… I find that’s a good way to build the overall strength you need to climb. Finger strength comes when you’re climbing, but for me maintaining a really strong core helps me get through some things I probably wouldn’t be otherwise able to do.