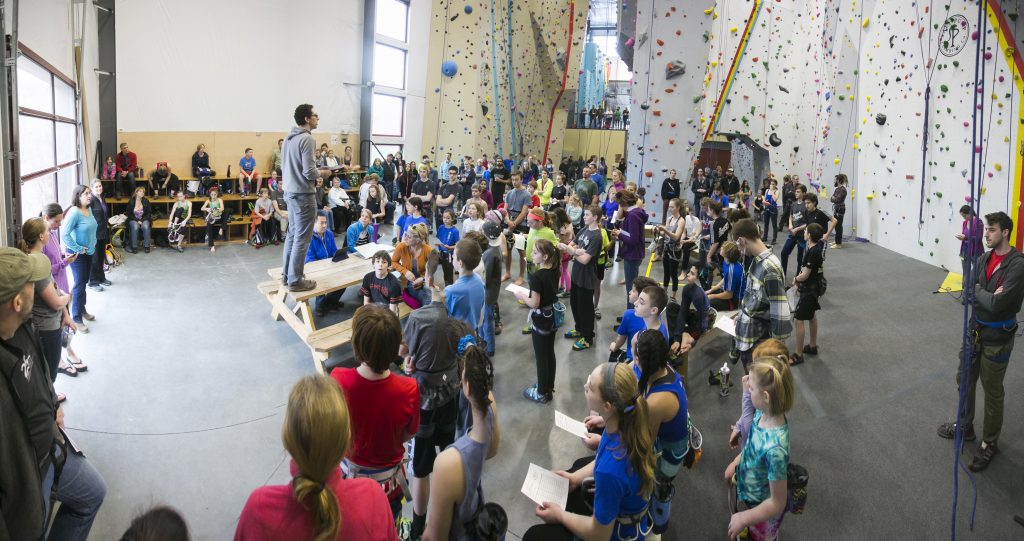 The next generation of climbing athletes gathered at Salt Pump last April for a USAC-sanctioned roped climbing competition.

Imagine a world where 10 year old kids climbed 5.14, 15 year old girls boulder v15, and dozens of kids warmed up on your V5 gym projects! Sounds crazy, right? Wrong! This fantasy world is the reality of indoor competition climbing. Since the recent surge of indoor competition climbing, young kids have proven two things: 1. The next generation will surely push the physical limits of climbing even further and 2. I better get used to the fact that 8 year olds will be climbing circles around me…8 year olds dude. The crazier thing is that these kids have been taking their strength outside, bone crushing some of the hardest established routes, and even putting up test pieces of their own.

What is Competition Climbing?

Just like any other sports, climbing has teams, seasons, divisions, national competitions, and even world competitions (I think intergalactic competitions are on the docket for next year, we just got to work on the whole gravity thing). USA Climbing (the unifying body that organizes all indoor competitions in the US) breaks the sport up into two seasons: bouldering and sport (i.e., roped) climbing. Bouldering season runs from early fall until mid winter, while the sport climbing season runs from mid winter through the spring. Each season begins with a handful of local competitions (similar to a regular season). Competitors need to attend and register a score (complete 1 climb) at a minimum of two local competitions, which will qualify them for the regional championships (round one of the playoffs). At the regional championships climbers will compete for an invitation to the divisional championships. The top 10 climbers in each age/gender group will advance from regionals to divisionals. At divisionals, climbers compete against the top climbers in each region to earn a spot at the national championships. The top six climbers in each age/gender group advance from divisionals to nationals. The Country is divided into 16 regions and eight divisions.

Championship Events (Regionals, Divisionals, and Nationals): At championship events, the comps are designed with each age/gender group in mind. Kids will climb routes set specifically for their age/gender category. Championship events differ slightly in format from event to event, but generally they have multiple rounds (qualifiers, semi’s, finals and even super finals if necessary). Success at each championship level event is necessary to move on to successive championship events, including selection onto the national team and representing the US at World Cup climbing events.

With the recent surge of competition climbing, it is becoming more and more commonplace for climbing gyms to have structured youth teams. With the guidance of coaches, climbing teams train multiple times a week in all aspects of the sport, so they can hone their skills. Climbing teams allow kids to better excel at climbing, while at the same time learn skills and make friendships that will last a lifetime. Keep an eye out this fall and you might spot the newest team, Team Salt Pump, training hard for the upcoming bouldering season! Feel free to ask them about their training and what skills they’re currently working on.

What Does this Mean for the Future of Climbing?

The creation of competition climbing has produced some of the strongest climbers out there, and has directly influenced the advancement of the sport. Each year more difficult routes are being sent, bigger walls are being climbed and boulders are being sent left and right that a generation ago would have been deemed impossible. What’s next? Just this year climbing has been adopted into the Olympics, making a statement that the sport is getting the recognition it deserves. Who knows, maybe some of the kids you see training like mad at Salt Pump will be the first to represent their country in the 2020 Olympics! Better get their autographs now 🙂